Alzheimer´s disease (AD) ist the most common neurodegenerative disorder and is characterized by synaptic disfunction, neuronal loss and cognitive decline. The major lesions found in the brains of AD patients are neruofibrillary tangles and neuritic plaques that are mainly composed of the β-amyloid peptide (Aβ) derived via proteolysis from the amyloid precursor protein APP. APP is a single pass transmembrane protein that is processed in two different ways: α-secretase cleaves APP within the Aβ region, thereby precluding Aβ formation and releasing the APPsα ectodomain; in the amyloidogenic pathway APP is sequentially cleaved by β- and γ-secretase, leading to Aβ formation. Whereas the mechanisms governing Aβ generation have been intensely studied, the physiological role of APP and of its numerous proteolytic fragments and the question of whether a loss of these functions contributes to AD are still unknown. 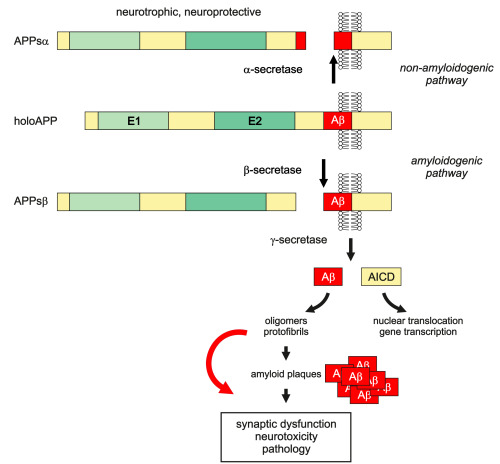 Determining the in vivo functions of APP in mammals is complicated by the presence of two APP-related genes, APLP1 and APLP2. APP and APLPs share two conserved domains in the extracellular region (E1 and E2) and one in the cytoplasmic domain, whereas the β-amyloid peptide is lacking in APLPs. Thus, functional redundancy may compensate for the loss of essential gene functions, e.g. in knockout (KO) models. Indeed, by generating various KO mutants we could demonstrate that the extensive structural similarities between APP and APLPs are also reflected at the functional level. Mice in which APP, APLP1, or APLP2 is inactivated are viable and APP KO mice revelaed reduced brain and body weight, reduced grip strength, altered locomotor activity, increased susceptibility to seizures and a defect in spatial learning and LTP. In contrast to the viable single mutants, combined APLP2-/-APP-/- and APLP2-/-APLP1-/- double mutants die shortly after birth indicating that APP family proteins serve redundant functions that are essential for viability (Heber et al., 2000). Whereas the brains of double knockout animals exhibit no obvious morphological defects, triple mutants lacking the entire APP gene family showed cranial dyspalsias resembling human type II lissencephaly (Herms et al., 2004). Within affected areas neuronal cells from the cortical plate migrated beyond their normal positions and protruded into the marginal zone and the subarachnoid space. Thus, APP/APLPs play a critical role in neuronal adhesion and positioning. This role in cell adhesion is also supported by data from a recent collaborative study demonstrating that APP family proteins form cis- and trans-dimers involved in cellular adhesion and may thus play a role in synaptic differentiation/function (Soba et al. 2005). Collectively, our data reveal an essential role for APP-family members in normal brain development and early postnatal survival. Work is in progress to circumvent early lethality and assess functions postnatally by generating tissue specific knockouts. 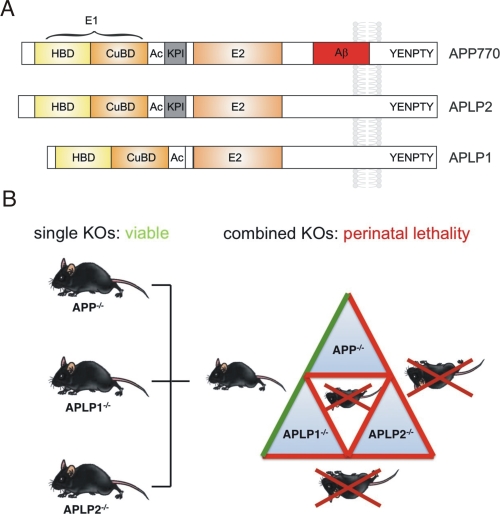 Secondly, another level of functional diversity may result from the complex proteolytic processing of APP and its APLP homogues by several secretases leading to diverse extra- and intracellular APP/APLP fragments. As these secretases have become major targets of therapeutic intervention it is of primary importance to elucidate the physiological function(s) of APP/APLPs and their processing products, because alterations in the activity or concentration of these fragments might have physiological consequences in itself. Ultimately we would like to elucidate the physiological relevance of APP processing and to understand the specific functions of the respective cleavage product for both physiology and pathophysiology. To this end replaced the endogenous APP locus by gene targeted alleles and generated knockin mice that exclusively express APP deletion variants corresponding either to the secreted APP ectodomain (APPsα) or to a C-terminal truncation lacking the YENPTY interaction motif (APPΔCT15) (Ring et al., 2007). Importantly, we could demonstrate that in both APP knockin lines the expression of APP N-terminal domains either largely attenuated or completely rescued the prominent deficits of APP knockout mice, such as reductions in brain and body weight, grip strength deficits, alterations in circadian locomotor activity, exploratory activity, and the impairment in spatial learning and LTP. Taken together our data suggest that the APP C-terminus is dispensable and that APPsα is sufficient to mediate the adult physiological functions of APP assessed by these tests (Ring et al., 2007). Recently, we could show that expression of APPsα alone on an APLP2 deficient background (in APPsα-DM mice) is sufficient to at least partially rescue the lethality of APP/APLP2-DKO mice (Ring et al, 2007; Weyer et al, 2011). In contrast, APPsα-KI knockin mice expressing APPs proved unable to circumvent lethality. Surviving APPsα-DM mice are, however, not normal but exhibit a complex phenotype with defects in both PNS and CNS physiology (Weyer et al, 2011). These findings also suggest, that not only APPsα but in addition other APP domains including the membrane anchored APP C-terminal domain are functionally relevant.

Compelling evidence from in vivo model systems within the past decade shows that the APP family of proteins is important for synaptic development and function in the central and peripheral nervous systems. The synaptic role promises to be complex and multifaceted for several reasons. The three family members have overlapping and redundant functions in mammals. They have both adhesive and signaling properties and may, in principle, act as both ligands and receptors. Moreover, they bind a multitude of synapse-specific proteins. Transgenic mice with modified or abolished expression of APP and APLPs have synaptic defects that are readily apparent. Studies of the neuromuscular junction (NMJ) in these transgenic mice have revealed molecular and functional deficits in neurotransmitter release, in organization of the postsynaptic receptors, and in coordinated intercellular development. Thus, ongoing work in the lab is directed to assess whether APP/APLP deficiency is also associated with related defects of neuronal morphology and/or synaptic function within the CNS. To this end we are analyzing organotypic hippocampal cultures of knockout and knockin mice with regard to morphology (dendritic complexity, synapse number, spine density of principal neurons in the hippocampus and cortex) and (in colaboration) for their electrophysiological characteristics (basal synaptic transmission, synaptic plasticity).

To gain further insights into APP/APLP functions in the adult CNS and to circumvent perinatal lethality we are generating conditional double knockout mice (cDKO) by crossing mice with floxed APP (and APLP2) alleles with different Cre transgenic lines. These mice will be analyzed with regard to brain morphology, neuronal survival, synapse formation and function, and finally functional consequences for cognition, learning and memory. Adult neurogenesis has been implicated in certain forms of learning and memory, and may provide plasticity to the aging brain. To study the role of endogenous APP/APLPs (and their cleavage products such as APPsα) as neurotrophic and neuroprotective molecules in adult neurogenesis, we employ mice with genetically modified APP/APLP loci. This way we intend to unravel the role of APP family proteins for adult neurogenesis within the subventricular zone and the hippocampus.